This website is created by the neighbor of Mkomazi MamboViewPoint. From our lodge, from a 1900 meter altitude, we look over Mkomazi National park. For a nice combination of a visit to Mkomazi and a stay in the mountains contact us!

Tourists will be able to watch rhinos at close range. Mkomazi National Park erected an electric fence with a 30-square km-area where the black rhino are.

Book your visit to the Rhino sanctuary and MamboViewPoint

The Mkomazi National Park is a magnificent, 3,500 square kilometre national park in northern Tanzania. Remote and initially inaccessible, it was established in 1951, but never attracted the financial support provided for the better known wildlife strongholds such as the Ngorongoro Conservation Area and the Serengeti National Parks. Only since 1989, when the Tanzanian Government re-examined the reserve’s status and designated it a National Priority Project, has its true significance and importance been recognized. Nowadays it is good accessible. From MamboViewPoint it is only one and a half hour drive to the Kivingo entrance.

The Mkomazi National Park is a spectacular wilderness. Within sight to the northwest is Mount Kilimanjaro, Africa’s highest summit. To the south, the Pare and Usambara Mountains form a dramatic backdrop and, to the north, Kenya’s vast Tsavo National Park shares a border with Mkomazi, making common ground for migratory herds of elephant, oryx and zebra during the wet season. Together with Tsavo, it forms one of the largest and most important protected ecosystems on earth.

Mkomazi is the southern tip of the Sahel zone. It is a classic dry-country reserve of grey-green nyika bush, ancient baobab trees and isolated rocky hills. Elsewhere, the seas of bush give way to open savannah woodlands of umbrella acacias and mbugas – shallow valleys of grassland.

The animals, too, are typical of the arid nyika. Giraffe, oryx, gerenuk, hartebeest, lesser kudu, eland, impala and Grant’s gazelle share the reserve with elephant, buffalo, and numerous predators, including lion, leopard and cheetah. In all, 78 species of mammals have been recorded.

The birds of Mkomazi are even more numerous, with over 400 recorded species. Doves, hornbills, weavers and guinea-fowl are all present in large numbers – as well as such striking species as the martial eagle and violet wood-hoopoe.

Why should you go to Mkomazi park? 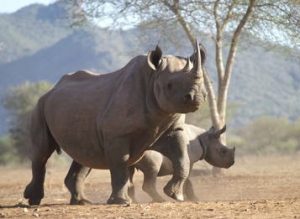 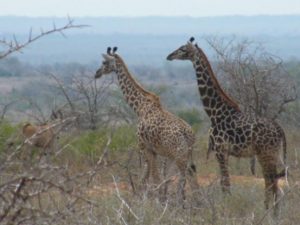 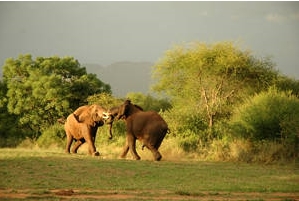